This research aimed to investigate the role of diverse transcription factors (TFs) and to delineate gene regulatory networks directly in conifers at a relatively high-throughput level. The approach integrated sequence analyses, transcript profiling, and development of a conifer-specific activation assay. Transcript accumulation profiles of 102 TFs and potential target genes were clustered to identify groups of coordinately expressed genes. Several different patterns of transcript accumulation were observed by profiling in nine different organs and tissues: 27 genes were preferential to secondary xylem both in stems and roots, and other genes were preferential to phelloderm and periderm or were more ubiquitous. A robust system has been established as a screening approach to define which TFs have the ability to regulate a given promoter in planta. Trans-activation or repression effects were observed in 30% of TF–candidate gene promoter combinations. As a proof of concept, phylogenetic analysis and expression and trans-activation data were used to demonstrate that two spruce NAC-domain proteins most likely play key roles in secondary vascular growth as observed in other plant species. This study tested many TFs from diverse families in a conifer tree species, which broadens the knowledge of promoter–TF interactions in wood development and enables comparisons of gene regulatory networks found in angiosperms and gymnosperms.

Wood is made up of three main components: cellulose, lignin and hemicellulose. Layers of cellulose and hemicellulose make up the walls of plant fibres. Lignin is deposited into this mixture and solidifies it, much like the cement surrounding metal rods in reinforced concrete. Cellulose and lignin are the two most abundant organic components on Earth.

This research served to identify the genes that control the production of the enzymes responsible for synthesizing these two compounds in white spruce. Using these genes, researchers will be able to develop markers that will serve to identify the attributes of the fibre and thus anticipate the quality of the wood. These markers will accelerate the genetic improvement of trees by making it possible to determine fibre quality at the molecular level rather than waiting until maturity. These results can be applied to all species of spruce. These observations correspond to those already made regarding other species whose genetic composition is known (poplar and rockcress). 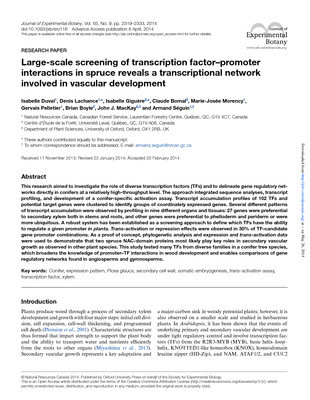