This article concerns the taxonomic reclassification of insects belonging to the genera Gnathusa, Mniusa and Ocyusa. It also includes identification keys, photographs, habitat data and distribution maps for all species in Canada that belong to these genera. For some species, this is the first reporting of their presence in Canada.

Taxonomy is a science dedicated to the classification of living organisms. Insects are grouped into various orders, which subdivide into families, genera, and then species. The taxonomic method is used in biodiversity studies, in particular, or in studies that measure the impact of anthropogenic activities on forest ecosystems. 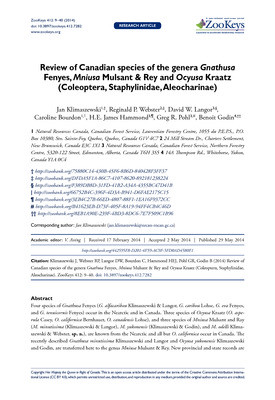