Spruce budworm (SBW) outbreaks are the most significant natural disturbance affecting balsam fir stands in Canada. Silivicultural practices, particularly partial cutting, have been proposed as a forest management tool for controlling SBW. In mature balsam fir–white birch stands, researchers studied the impact of partial cutting on parasitoids that attack SBW. The SBW populations were endemic and two types of selective cutting (25% and 40%) were carried out in 2009. The researchers introduced larvae and pupae into the stands over a three year period following the cutting in order to study the levels of parasitism. Their findings were as follows:

•The level of parasitism in pupae was too low to be able to establish a comparison between the two types of selective cutting;

•Two years after partial cutting, parasitism in larvae had been significantly reduced. The parasitism was caused by Tranosema rostrale, a small wasp that lays a single egg directly below the skin of SBW larvae;

•Three years after partial cutting, no significant difference was found in larvae parasitism.

Partial cutting therefore has no stable influence on parasitism in endemic SBW populations, but under certain conditions, it can reduce parasitism. 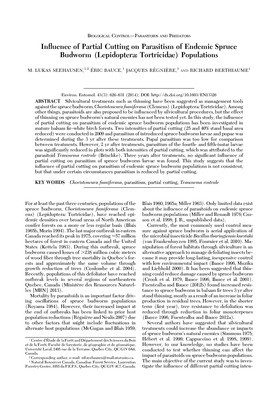