Hybridization and introgression are pervasive evolutionary phenomena that provide insight into the selective forces that maintain species boundaries, permit gene flow, and control the direction of evolutionary change. Poplar trees (Populus L.) are well known for their ability to form viable hybrids and maintain their distinct species boundaries despite this interspecific gene flow. We sought to quantify the hybridization dynamics and postzygotic fitness within a hybrid stand of balsam poplar (Populus balsamifera L.), eastern cottonwood (P. deltoides Marsh.), and their natural hybrids to gain insight into the barriers maintaining this stable hybrid zone. We observed asymmetrical hybrid formation with P. deltoides acting as the seed parent, but with subsequent introgression biased toward P. balsamifera. Native hybrids expressed fitness traits intermediate to the parental species and were not universally unfit. That said, native hybrid seedlings were absent from the seedling population, which may indicate additional selective pressures controlling their recruitment. It is imperative that we understand the selective forces maintaining this native hybrid zone in order to quantify the impact of exotic poplar hybrids on this native system.

Poplars are known for their ability to hybridize. A "hybrid" is a tree resulting from a natural or artificial cross between two species and that has characteristics of both parents. When hybrid poplars cross again with individuals belonging to the species of one of their parents, this is known as introgression. Hybridization and introgression are natural phenomena that allow poplars to adapt to new conditions.

The researchers examined how hybridization took place in a stand of native poplars primarily composed of cottonwood and balsam poplar. Their observations showed that the hybrids were mostly derived from cottonwood seeds, but afterwards, introgression most often occurred with balsam poplar.

A study of the seedlings from this stand revealed that none of them were hybrid poplar seedlings. This indicates that selection pressure takes place at the regeneration stage.

Knowing that native poplars can share distribution ranges with poplars with exotic components, understanding these selection mechanisms is essential. 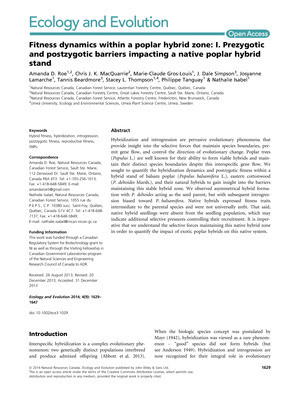