Trees bearing novel or exotic gene components are poised to contribute to the bioeconomy for a variety of purposes such as bioenergy production, phytoremediation, and carbon sequestration within the forestry sector, but sustainable release of trees with novel traits in large-scale plantations requires the quantification of risks posed to native tree populations. Over the last century, exotic hybrid poplars produced through artificial crosses were planted throughout eastern Canada as ornamentals or windbreaks and these exotics provide a proxy by which to examine the fitness of exotic poplar traits within the natural environment to assess risk of exotic gene escape, establishment, and spread into native gene pools. We assessed postzygotic fitness traits of native and exotic poplars within a naturally regenerated stand in eastern Canada (Quebec City, QC). Pure natives (P. balsamifera and P. deltoides spp. deltoides), native hybrids (P. deltoides x P. balsamifera), and exotic hybrids (trees bearing Populus nigra and P. maximowiczii genetic components) were screened for reproductive biomass, yield, seed germination, and fungal disease susceptibility. Exotic hybrids expressed fitness traits intermediate to pure species and were not significantly different from native hybrids. They formed fully viable seed and backcrossed predominantly with P. balsamifera. These data show that exotic hybrids were not unfit and were capable of establishing and competing within the native stand. Future research will seek to examine the impact of exotic gene regions on associated biotic communities to fully quantify the risk exotic poplars pose to native poplar forests.

Over the last century, hybrid poplars were planted in eastern Canada as ornamental or windbreak trees. Many of them had an exotic component, meaning that they were derived from a cross between a native Canadian poplar and a poplar from outside of Canada (exotic). To better understand the potential dispersion of exotic genes into the environment, the researchers examined the ability of native poplars (pure or hybrid) and hybrid poplars with exotic components to transmit specific characteristics to their descendants.

Using a natural stand located in an eastern Canadian urban area, the researchers collected data on the success of regeneration, and seedling growth, germination rates and vulnerability to disease. By comparing the characteristics of parent trees and their descendants, they concluded that hybrid poplars with exotic components have characteristics that are found in both parents and that they are not significantly different from native hybrid poplars.

These results indicate that hybrid poplars with exotic components have adapted to environmental conditions; in urban areas, their seedlings successfully establish themselves in a natural stand, despite the competition. 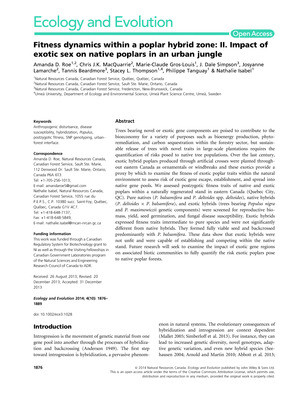