Due to climatic change, it might be expected that in the next years, the habitat of Pinus hartwegii Lindl. could sharply decrease. It is then convenient to establish conservation strategies that diminish or counteract the effects of the climatic change. However, a first step in establishing conservation measures is to quantify the adaptive variation of the species and the evolutionary forces that may have shaped it. To understand the evolutionary forces acting on P. hartwegii populations, patterns of genetic variation, assessed through quantitative traits and isozymes, were compared in 12 natural populations along an altitudinal transect in Michoacán, Mexico, by estimation of QST and FST statistics. Although significant genetic differentiation among populations was found for quantitative traits and isozymes, most of the quantitative traits showed a strong clinal pattern of variation associated with site elevation, but not for isozymes. Average QST value (0.200) was higher than FST value (0.127), but they were not significantly different. Results indicate that natural selection, imposed by the altitudinal environmental gradient, is acting on quantitative traits, while other evolutionary forces, like genetic drift and gene flow, are acting on isozymes. The similarity of QST and FST values could be attributed to the joint action of natural selection and genetic drift.

Climate change could restrict the distribution range of Hartweg’s pine in Mexico. A conservation strategy therefore needs to be established for this species in order to reduce or mitigate the impact of this change.

To do so, the adaptability of the species must first be determined. The researchers have achieved this by comparing 12 natural populations located at different altitudes. 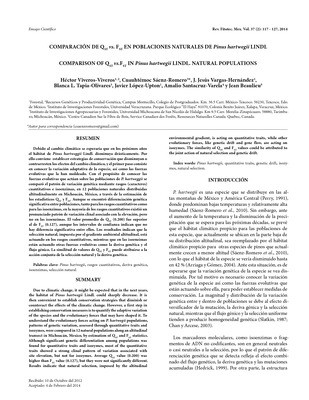