Exotic larch (Larix decidua Mill., Larix kaempferi (Lamb.) Carr. and Larix sibirica Ledeb.) and their hybrids have been introduced into Canada to test adaptation and growth for reforestation purposes. For tree breeding operations, provenance trials and seed orchards of exotic larches and their hybrids have been established in arboreta adjacent to natural forest stands of the indigenous species Larix laricina (Du Roi) K. Koch. This proximity offers an opportunity to measure spontaneous hybridization and the recruitment of hybrids. Using a combination of two chloroplast and three mitochondrial DNA markers, we estimated the rate of spontaneous hybridization taking place between native (L. laricina) and exotic (L. decidua, L. kaempferi, L. sibirica) species of larch in two arboreta. More than 5,000 seeds and 1,000 recruits from the two experimental sites were sampled and genetically identified. The occurrence of spontaneous hybridization between L. laricina and the exotics was found both in seeds and from recruits freely established near the plantations. A low hybridization rate (3 % or less) was observed among the seeds of L. laricina maternal trees. Spontaneous native-exotic hybrids were also observed to establish and survive in the environment under the current climatic conditions at a similarly low rate. However, a much higher and variable rate of establishment was observed for recruits with exotic components (up to 34.6 % at one site). These results indicate that the spontaneous hybridization and the recruitment of hybrid and exotic recruits do occur and should be taken into consideration in the management and establishment of plantations of fast-growing species with exotic components.

Three Eurasian larch species were introduced into Canada to test their adaptation and growth capacity for reforestation purposes. These larch trees and their hybrids were planted in two seed orchards (Gaspé peninsula and Centre-du-Québec) in order to select good quality seeds.

Researchers established these orchards near forest stands in which tamarack, an indigenous species, can be found. They used genetic markers to measure the rate of hybridization between native and exotic species of larch. Hybridization was observed in both seed orchards, both in seeds and in seedlings established near the plantations. A low (~3%) hybridization rate was observed in seeds when the “mother” was tamarack. However, a high rate of establishment (i.e., up to 35% in one orchard) was observed for hybrid seedlings with exotic components growing in clearings (i.e., plantation gaps or at the edge of the plantation). 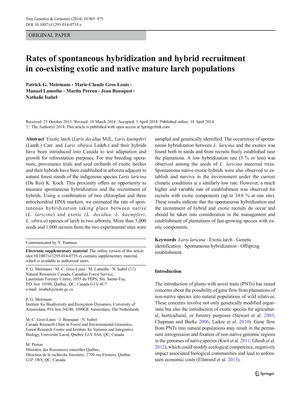