The balsam woolly adelgid (Adelges piceae) is a gout-inducing hemipteran native to the silver fir forests of Europe. Introduced to eastern North America approximately 100 years ago, it is now found in most balsam fir forests in Atlantic Canada. When A. piceae feed, they trigger a reaction in the host branch that alters both xylem and phloem morphology. We conducted a field survey to examine the relationship between_ A. piceae_ gout density and balsam fir foliar chemistry and shoot growth in naturally unthinned and precommercially thinned stands. A. piceae gout density negatively affected branch growth and was related to changes in the chemistry of older, but not current-year foliage. Older foliage experienced decreases in camphene and bornyl acetate, while foliar concentrations of camphene, myrcene, phenolics, potassium and water differed between thinned and unthinned stands. Foliar chemistry was also influenced by interactions between thinning and A. piceae gout density in old foliage. This study suggests that changes in balsam fir associated with A. piceae gout density may force native defoliators that feed in highly gouted trees to adapt to diets of different chemical compositions and that thinning may alter these interactions.

The balsam woolly adelgid is an insect that originated in Europe. It has been present in Canada for the last 100 years, and mainly attacks balsam fir. It is now found in most of the fir forests in the Atlantic Provinces. Because of climate change, its area of infestation has spread from Nova Scotia to New Brunswick and Newfoundland. The insect is moving more and more toward northern parts of the country.

The researchers sought to determine how the presence of this insect affected fir tree growth and chemical composition of the foliage. They noted that infested trees had fewer buds and shorter annual shoots. In addition, the researchers noticed a change in the chemical composition of old foliage (foliage from previous years). Indeed, there is a decrease in the chemical defense substances emitted by trees (monoterpenes), which makes the foliage more attractive to leaf defoliators such as the spruce budworm or the balsam fir sawfly. These changes could have an impact during outbreaks of these pests or other defoliators. 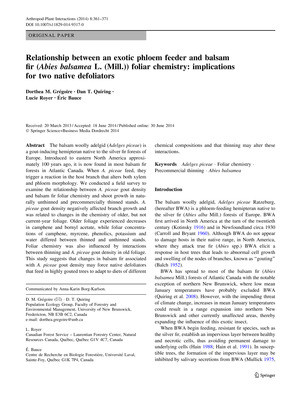