Salvage logging following fire has become increasingly used during the last few decades as a way to mitigate economic losses caused by fire. The removal of burned mature trees including their aerial seedbanks immediately after fire could have impacts on post-fire tree recruitment but specific effects are still unknown. We conducted a study of a fire in the boreal forest of Québec, Canada, to answer the following questions: Does fire severity influence tree compositional changes after fire? Does salvage logging affect these changes by favouring species that can reproduce vegetatively? Does salvage logging reduce amongsites heterogeneity relative to natural post-fire forests? To address these questions, we measured preand post-fire tree stocking (2 years after fire) of burned forest of different pre-fire stand composition types both in salvaged and non-salvaged sites, whereas fire severity was measured in the latter only. Species composition was evaluated using a Principal Component Analysis, and mixed models were used to test the effects of canopy fire severity, residual organic layer thickness, stand type and salvage logging on pre- to post-fire composition changes. In non-salvaged sites, fire severity had a significant effect on composition changes, and the effect depended on stand type. Low fire severity favoured species that can reproduce vegetatively such as Populus tremuloides, whereas moderate and high fire severity favoured the aerial seedbank species such as Pinus banksiana and Picea mariana. We found no effect of residual organic layer thickness on post-fire composition changes. Salvage treatment had a significant effect on post-fire composition changes and the effect depended on stand type. Overall, salvage logging tended to favour species relying upon vegetative reproduction more than fire alone, which favoured P. banksiana. Although among-site heterogeneity after salvage logging was not smaller than after fire only, salvage alters species composition more than does natural fire alone. Since salvage logging and low severity portions of the burn, which are generally not salvaged, both favour tree species with vegetative reproduction, our results suggest that these species will increase their dominance throughout the landscape if burned forests are systematically salvaged. We suggest strategies that can help to attenuate this divergence from natural post-fire conditions.

The results show that fire severity and logging have an impact on regeneration. In areas where there is no salvage logging, trembling aspen is the main species emerging after a less severe fire, while black spruce and jack pine dominate after a moderate to severe fire. When salvage logging occurs, it is carried out in areas where the fire damage was moderate to severe and it benefits trembling aspen. The probable reasons for explaining this situation are the removal of pine and spruce seed trees and the fact that trembling aspen reproduces vegetatively. 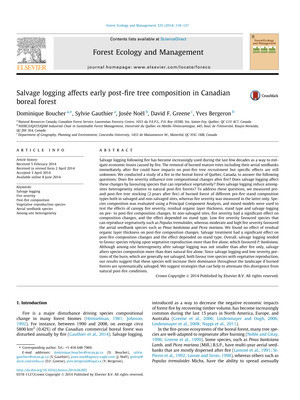