High moisture levels and low frequency of wildfires have contributed to the accumulation of the organic layer in open black spruce (Picea mariana)–Sphagnum dominated stands of eastern boreal North America. The anticipated increase in drought frequency with climate change could lead to moisture losses and a transfer of the stored carbon back into the atmosphere due to increased fire disturbance and decomposition. Here we studied the dynamics of soil moisture content and weather conditions in spruce–feather moss and spruce–Sphagnum dominated stands of the boreal Clay Belt of eastern Canada during particularly dry conditions. A linear mixed model was developed to predict the moisture content of the organic material according to weather, depth and site conditions. This model was then used to calculate potential depth of burn and applied to climate model projections to determine the sensitivity of depth of burn to future fire hazards. Our results suggest that depth of burn varies only slightly in response to changes in weather conditions in spruce–Sphagnum stands. The reverse holds true in spruce–feather moss stands. In conclusion, our results suggest that spruce–Sphagnum stands in the boreal Clay Belt may be resistant to an increase in the depth of burn risk under climate change.

Eastern North America is home to many black spruce forests. When these stands are open, the ground is often covered with Sphagnum or moss. High humidity levels and low incidence of forest fires have contributed to the accumulation of organic matter on the ground in these stands.

However, climate change could lead to more frequent droughts and an increased number of fires. To better understand the effects of these disturbances, the researchers studied the relationship between soil moisture levels and weather conditions in spruce–feather moss and spruce–Sphagnum stands. These forests were located in the Abitibi Clay Belt (Quebec). The researchers developed a model to predict the moisture content of organic matter on the ground as a function of the weather, the depth of the organic matter and site conditions.

This model was then used to calculate potential depths of burn under different climate change scenarios. The researchers concluded that this depth varies very little in spruce–Sphagnum stands, but it varies significantly in spruce–feather moss stands. They thus demonstrated the resilience of spruce–Sphagnum stands in the Abitibi Clay Belt in response to increased depths of burn caused by climate change. 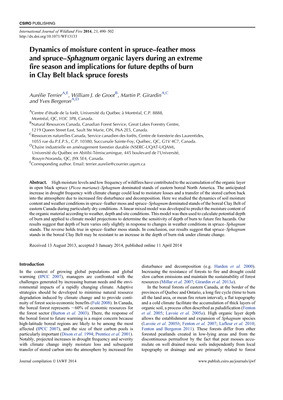