A fire regime can be characterized by area burned, severity of fires, their recurrence and their abundance in a given area. In eastern Canada, there are different fire regimes. They are influenced by complex interactions between regional climate, topography and the amount of available fuel. However, fire size is often the only spatial attribute considered.

This article explores new spatial attributes, the direction of fires and terrain configuration, and the connections between such attributes and regional physiography. The researchers found that fires are larger on land where the configuration allows prevailing winds to spread the fire, because there are no natural barriers to slow them down. However, where fires are smaller, the direction of physiographic and water drainage patterns is perpendicular to prevailing winds, thus creating natural firebreaks. This study highlights the need to understand the relationship between physiography and different aspects of the climate on a larger scale in order to better understand fire regimes. 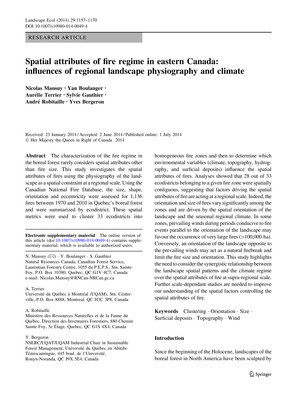