Phytophthora ramorum is a pathogenic oomycete that causes sudden oak death in the Western USA and sudden larch death in the UK. Until recently, three genetically divergent clonal lineages of P. ramorum were known (EU1, NA1 and NA2), named according to the continent on which they were first detected. In 2009, a fourth lineage named EU2 was discovered in the UK. Sequencing and microsatellite genotyping revealed that the EU2 lineage is genetically distinct from all other lineages. Allele-specific oligonucleotide-PCR (ASO-PCR) assays using real-time PCR were developed in this study, allowing for the identification of the EU2 lineage. Also, a combination of ASO-PCR assays targeting the cellulose binding elicitor lectin (CBEL) locus was validated to rapidly identify all four lineages. Sequencing of the CBEL locus revealed eight single nucleotide polymorphisms (SNPs) that distinguished EU2 from the other three lineages. Two ASO-PCR assays were developed from these SNPs, providing the ability to rapidly identify EU2 individuals relative to EU1, NA1 and NA2 individuals. These new assays were combined with two existing assays targeting the same locus to allow rapid and simple identification of all four lineages. Blind tests performed on a panel of representative samples revealed diagnostic profiles unique to each lineage. These markers can be used with diseased field samples, making them well suited for routine procedures in diagnostic laboratories to identify P. ramorum.

Researchers have developed a test to identify a new type of Phytophthora ramorum, the fungal pathogen responsible for sudden oak death in the western United States and for sudden larch death in the United Kingdom. These two diseases have a major economic impact in those countries. Until quite recently, three different types of P. ramorum were known and could be differentiated. In 2009, a fourth type was identified in the United Kingdom.

The research work led to the development of a molecular test to distinguish this fourth type of P. ramorum from the others. This new test and those developed previously were validated in blind tests for their ability to specifically recognize each pathogen type, thus making it possible to quickly and easily differentiate the type of P. ramorum detected. 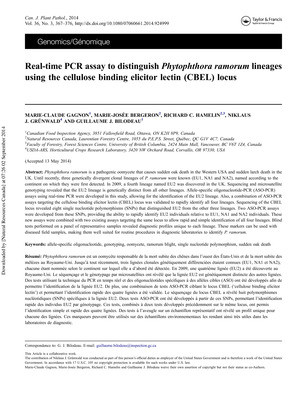