Over 18 million ha of forests have been destroyed in the past decade in Canada by the mountain pine beetle (MPB) and its fungal symbionts. Understanding their population dynamics is critical to improving modeling of beetle epidemics and providing potential clues to predict population expansion. Leptographium longiclavatum and Grosmannia clavigera are fungal symbionts of MPB that aid the beetle to colonize and kill their pine hosts. We investigated the genetic structure and demographic expansion of L. longiclavatum in populations established within the historic distribution range and in the newly colonized regions. We identified three genetic clusters/populations that coincide with independent geographic locations. The genetic profiles of the recently established populations in northern British Columbia (BC) and Alberta suggest that they originated from central and southern BC. Approximate Bayesian Computation supports the scenario that this recent expansion represents an admixture of individuals originating from BC and the Rocky Mountains. Highly significant correlations were found among genetic distance matrices of L. longiclavatum, G. clavigera, and MPB. This highlights the concordance of demographic processes in these interacting organisms sharing a highly specialized niche and supports the hypothesis of long-term multipartite beetle-fungus co-evolutionary history and mutualistic relationships.

In addition to affecting trees directly, the mountain pine beetle carries fungi that also cause damage. The objective of this study was to describe the geographic distribution of the populations of one of these fungi, Leptographium longiclavatum, and to assess its expansion dynamics. Using molecular techniques, the researchers were able to identify three populations of L. longiclavatum of various geographic origins, thus making it possible to demonstrate that the populations recently established in northern British Columbia and Alberta come from central and southern British Columbia.

More than 18 million hectares of forest have been destroyed in Canada in the past decade by the mountain pine beetle and its associated fungi. 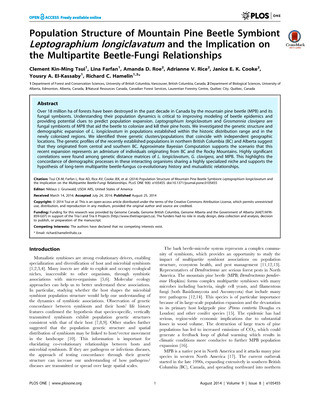