Large-scale mapping of soil properties is increasingly important for environmental resource management. While forested areas play critical environmental roles at local and global scales, forest soil maps are typically at low resolution. The objective of this study was to generate continuous national maps of selected soil variables (C, N and soil texture) for the Canadian managed forest landbase at 250 m resolution. We produced these maps using the _k_NN method with a training dataset of 538 ground-plots from the National Forest Inventory (NFI) across Canada, and 18 environmental predictor variables. The best predictor variables were selected (7 topographic and 5 climatic variables) using the Least Absolute Shrinkage and Selection Operator method. On average, for all soil variables, topographic predictors explained 37% of the total variance versus 64% for the climatic predictors. The relative root mean square error (RMSE%) calculated with the leave-one-out cross-validation method gave values ranging between 22% and 99%, depending on the soil variables tested. RMSE values < 40% can be considered a good imputation in light of the low density of points used in this study. The study demonstrates strong capabilities for mapping forest soil properties at 250 m resolution, compared with the current Soil Landscape of Canada System, which is largely oriented towards the agricultural landbase. The methodology used here can potentially contribute to the national and international need for spatially explicit soil information in resource management science.

In Canada, the provinces and territories are responsible for managing their forests and performing inventories based on their specific needs. Because of this, the data collected vary from one province to another, which presents an obstacle when studying trans-border forest issues (e.g. insect outbreaks). Agriculture and Agri-Food Canada have produced soil maps covering all of Canada. These maps mainly cover agricultural land, and are imprecise and difficult to use for commercial forest areas. The National Forest Inventory (NFI) partially addresses this gap by compiling and harmonizing provincial and territorial inventories and point data on soil properties from field plots. However, the NFI only covers 1% of Canada’s landmass, while continuous mapping is needed to analyze one or more forest issues.

The purpose of this research project was to develop pan-Canadian soil maps in order to eliminate this limitation. The researchers used a mosaic of pixels at a resolution of 250 m x 250 m as a basic grid. Some of these pixels contain data on soil properties. Applying a statistical technique (k-nearest-neighbours or _k_NN) makes it possible to use this information to estimate several properties of forest soils throughout Canada’s commercial forests.

The soil maps thus generated will serve to determine the most sensitive and most suitable sites for biomass harvesting. They can be superimposed directly over forest attribute maps developed by the CFS as they were produced using the same basic grid. 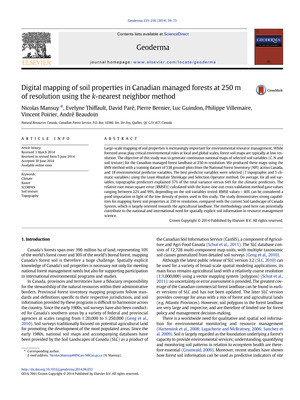