Northern white-cedar (Thuja occidentalis) is a species of high commercial and ecological value, the abundance of which has been declining since the middle of the 19th century. Very little information regarding its silviculture in mixedwood stands is currently available, even though a significant portion of wood resources comes from these stands. The present study is a retrospective analysis of white-cedar growth in partially harvested mixedwood stands of western Quebec, Canada. Eight stands distributed across two regions were analyzed. Dendrochronological approaches examined long-term diameter growth for sample white-cedar trees and stems of associated species. These approaches were used to reconstruct stand characteristics at the time of harvesting, together with local harvesting intensity. The study demonstrated white-cedar’s capacity to maintain good growth for long periods of time and at large tree sizes. Accession to the upper canopy positions occurs through repeated episodes of suppression/release, most of which seem to be associated with spruce budworm (Choristoneura fumiferana) outbreaks. White-cedar response to partial harvesting varies with tree size, residual basal area and species composition. Growth response was generally stronger for small trees, even though large trees still maintained the best diameter growth. Growth of white-cedar was negatively affected by an increase in softwood proportion in basal area. Growth responses to harvesting could be sustained for a period of 20 years.

In this study, the researchers demonstrated in work that they carried out in Western Quebec that eastern white cedar in mixed stands (consisting of coniferous and deciduous trees) usually maintains a good growth rate over 20 years following partial cutting. However, this response varies, depending on tree size and stand age and composition. For example, a high percentage of conifers in the stand hampers eastern white cedar growth.

Eastern white cedar is a species of high commercial and ecological value, but its numbers have been in decline since the mid 19th century. It is therefore important to better understand its response to human activities. 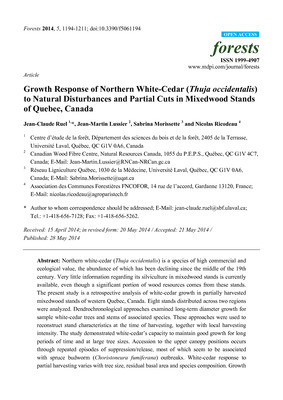