This study demonstrates that pre commercial thinning in jack pine stands where fire or salvage cutting has occurred should be done when the stands are between 7 and 10 years of age.

If the thinning is done before the stand is 7 years old, jack pine stems whose lower branches are still alive continue to develop. From these branches, the tree can develop up to four additional stems after the thinning operation. Therefore, rather than being reduced to promote the growth of residual trees, density increases considerably.

If the thinning is done after the stand is 7 years old, the lower branches begin to die from lack of light and cannot continue to grow. The researchers also recommend cutting trees between 10 and 13 cm above the ground so as to eliminate lower branches.
Pre commercial thinning is a common silvicultural treatment performed to control density and promote the growth of forest stands. 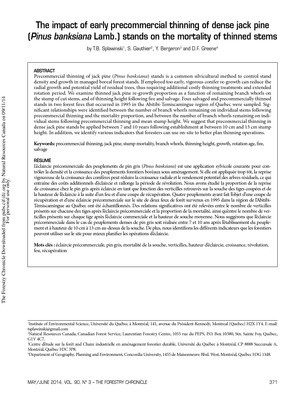