Genomic selection (GS) is of interest in breeding because of its potential for predicting the genetic value of individuals and increasing genetic gains per unit of time. To date, very few studies have reported empirical results of GS potential in the context of large population sizes and long breeding cycles such as for boreal trees. In this study, we assessed the effectiveness of marker-aided selection in an undomesticated white spruce (Picea glauca (Moench) Voss) population of large effective size using a GS approach. A discovery population of 1694 trees representative of 214 open-pollinated families from 43 natural populations was phenotyped for 12 wood and growth traits and genotyped for 6385 single-nucleotide polymorphisms (SNPs) mined in 2660 gene sequences. GS models were built to predict estimated breeding values using all the available SNPs or SNP subsets of the largest absolute effects, and they were validated using various cross-validation schemes. The accuracy of genomic estimated breeding values (GEBVs) varied from 0.327 to 0.435 when the training and the validation data sets shared half-sibs that were on average 90% of the accuracies achieved through traditionally estimated breeding values. The trend was also the same for validation across sites. As expected, the accuracy of GEBVs obtained after cross-validation with individuals of unknown relatedness was lower with about half of the accuracy achieved when half-sibs were present. We showed that with the marker densities used in the current study, predictions with low to moderate accuracy could be obtained within a large undomesticated population of related individuals, potentially resulting in larger gains per unit of time with GS than with the traditional approach.

Genomic selection consists in estimating the genetic value of an individual based on its genetic profile, obtained with a very large number of markers. This is attracting more and more interest on the part of officers in charge of tree breeding programs. In essence, it will allow for earlier prediction of genetic properties in trees than traditional methods.

The breeding cycle of conifers such as spruce is long. In this study, the researchers used thousands of genetic markers to estimate how accurately they could predict the genetic value of more than 1600 white spruce, for 12 wood quality and growth traits. Initially, mathematical models were developed to associate these traits with genetic markers in order to predict the genetic value of the trees. The prediction accuracy of these models was then compared with that of traditional models that use the genetic backgrounds of the trees. The models using genetic markers provided a prediction accuracy equivalent to approximately 90% of that of conventional models. The researchers therefore recommend using genomic selection in combination with somatic embryogenesis techniques to accelerate breeding programs. This will decrease the time required for species improvement. 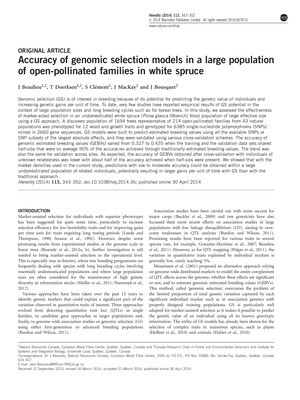