In Canada, each province and territory is responsible for its own forest management. However, issues such as forest insect outbreaks and climate change extend beyond provincial and territorial boundaries. The study of such phenomena is therefore hampered by the difficulty of gathering inventory data collected by the provinces and territories and aggregating this data for Canada as a whole. An immutable state of affairs? Not so, thanks to the work of researchers from the Canadian Forest Service (CFS).

This publication reports on a Canada-wide map developed to analyze forest problems overlapping provinces and territories.

Using NASA satellite images along with climate and topographical data, Canadian Forest Service researchers have developed maps that can be used to estimate up to 127 attributes (including height, age, volume and forest composition) in all of Canada’s managed forests. Maps showing these attributes help to more effectively analyze the impact of human and natural disturbances affecting these forests. 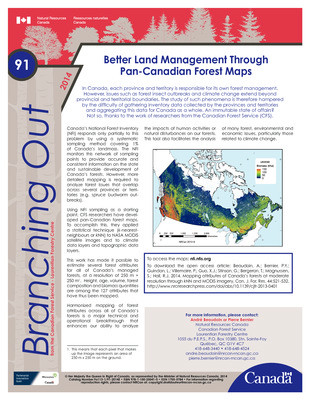