Spruce budworm (SBW) outbreaks are the major natural disturbance affecting balsam fir stands in Canada. In Eastern Canada, the SBW destroys as many trees as fire. A new epidemic has been causing damage in Eastern Canada since 2006. In fact, areas defoliated by the SBW have been doubling every year, particularly on the North Shore, where 70% of Quebec’s defoliated areas are found.

Canadian Forest Service researchers targeted genes that would allow SBW to increase its winter tolerance as well as other genes that are important for SBW growth. Knowledge of these genes is relevant for developing products that inhibit their expression in order to control the triggering and spread of outbreaks.

Also available under the title:
Using genomics to control spruce budworm. Branching out from the Canadian Forest Service, Laurentian Forestry Centre. No. 92. (English) 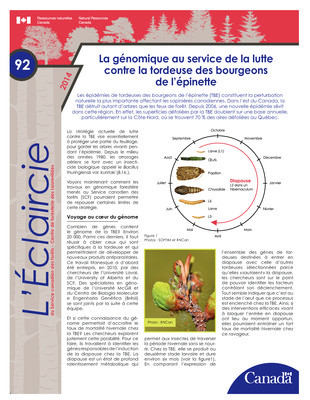