In this study latent heat flux (λE) measurements made at 65 boreal and arctic eddy-covariance (EC) sites were analyses by using the Penman–Monteith equation. Sites were stratified into nine different ecosystem types: harvested and burnt forest areas, pine forests, spruce or fir forests, Douglas-fir forests, broadleaf deciduous forests, larch forests, wetlands, tundra and natural grasslands. The Penman–Monteith equation was calibrated with variable surface resistances against half-hourly eddy-covariance data and clear differences between ecosystem types were observed. Based on the modeled behavior of surface and aerodynamic resistances, surface resistance tightly control λE in most mature forests, while it had less importance in ecosystems having shorter vegetation like young or recently harvested forests, grasslands, wetlands and tundra. The parameters of the Penman–Monteith equation were clearly different for winter and summer conditions, indicating that phenological effects on surface resistance are important. We also compared the simulated λE of different ecosystem types under meteorological conditions at one site. Values of λE varied between 15% and 38% of the net radiation in the simulations with mean ecosystem parameters. In general, the simulations suggest that λE is higher from forested ecosystems than from grasslands, wetlands or tundra-type ecosystems. Forests showed usually a tighter stomatal control of λE as indicated by a pronounced sensitivity of surface resistance to atmospheric vapor pressure deficit. Nevertheless, the surface resistance of forests was lower than for open vegetation types including wetlands. Tundra and wetlands had higher surface resistances, which were less sensitive to vapor pressure deficits. The results indicate that the variation in surface resistance within and between different vegetation types might play a significant role in energy exchange between terrestrial ecosystems and atmosphere. These results suggest the need to take into account vegetation type and phenology in energy exchange modeling.

A better understanding of how terrestrial ecosystems affect the climate system improves our ability to predict future climate in the context of climate change. The flow of water vapour generated by evapotranspiration is one of the dominant mechanisms of energy exchange between forests and the atmosphere, but its value is still poorly defined in models.

In this study, we used the FLUXNET global network to gather evapotranspiration measurements obtained in the most common natural ecosystems in sub-boreal, boreal and arctic regions of the planet. Data collected from 65 sites represented different types of forests as well as tundra, wetlands and natural grasslands.

This allowed us to quantify the parameters of the flow of evapotranspiration in these ecosystems and to better assess how this flow reacted to changes in ecosystem properties. In addition to the values obtained for each ecosystem, this research has clearly demonstrated the importance of the roughness of the interaction surface (i.e. uneven surface) (e.g. forest, an uneven surface vs. a lake, an even surface) between the ecosystem and the atmosphere as a key factor of differentiation between ecosystems in the same climatic region. These developments should improve consideration of the influence of terrestrial ecosystems on climate predictions. 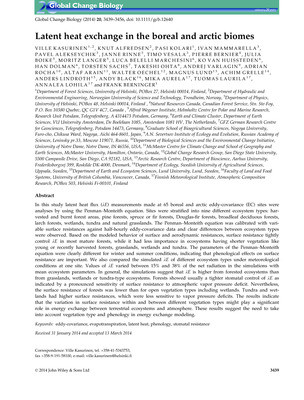