Rove beetles (Coleoptera: Staphylinidae) are recognised as important components of agroecosystems and are best known for their contribution to biological control as predators of arthropod pests. Unfortunately, knowledge of their bionomics in North American agroecosystems is sparse. Therefore, soybean-hedgerow agroecosystems in Ontario, Canada, were surveyed in 2009–2010 to identify common, widespread members of the assemblage and characterise their seasonal activity patterns. The potential for refuge habitat in adjacent hedgerows was assessed outside of the growing season. The rove beetle assemblage of soybeans during the growing season was found to be a less diverse subset of that found in surrounding hedgerow areas, especially with respect to native species. Both native and non-native species were common (>1% activity density). Based on literature records, most common species were predaceous, univoltine, and adult overwintering. Most common species exhibited the highest activity density midway through the growing season and all were detected in hedgerow habitats outside the growing season. Comparisons with the staphylinid fauna of other North American agroecosystems revealed several common species to dominate assemblages under a wide variety of conditions. This research provides a framework for future agroecological studies of this poorly understood, but abundant and diverse, assemblage of beetles.

Rove beetles are insects belonging to the order Coleoptera. Found in large numbers in agricultural ecosystems, the majority of rove beetles are predators of arthropods (such as centipedes), some of which cause crop damage.

This study, conducted in Ontario soybean fields in 2009 and 2010, aimed to identify the most numerous species of rove beetles, document their assemblage, and characterize their seasonal activities. In addition, the study examined the potential for hedges adjacent to crops to act as a refuge for rove beetles outside of the growing season.

Here are the key findings: •the rove beetles, particularly native species, were less diversified in the field than in adjacent hedges during the growing season;

•the most common species were predators that only had one generation per year, and overwintered as adults;

•activity rate was highest halfway through the growing season;

•the most common species are the same as those found in other North American studies on the subject.

This research provides a framework for future studies on the ecology of these insects in agricultural environments. 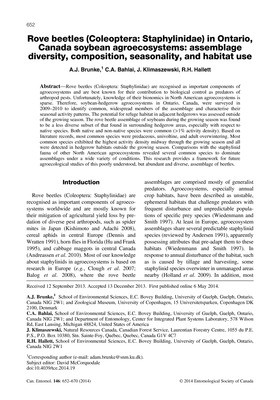