Pitfall traps were used to monitor predatory arthropod numbers along two types of field boundary, a post and wire fence line and a Cupressus macrocarpa hedge, along the same paddock margin in Canterbury, New Zealand, over 24 months. The seven most abundant predator groups recorded were: Araneae > Phalangiidae > Staphylinidae > Coccinellidae > Chilopoda > Hemerobiidae > Carabidae. Araneae, Phalangiidae, Staphylinidae, Chilopoda and Hemerobiidae were found in larger numbers at the wire fence than at the hedge site, whereas the numbers of Carabidae and Coccinellidae adults exhibited no field margin preference. However, more species of Araneae and Staphylinidae were caught at the hedge site, whereas species richness of carabid beetles was greatest at the wire fence. Principal component analysis clearly separated the samples collected from the two habitats based on the assemblages of Araneae, Staphylinidae and Carabidae, and certain species in each of these taxonomic groups appeared to be particularly associated with one boundary type or the other. All the main taxonomic groups exhibited clear seasonal patterns, with distinct peaks in abundance occurring at certain times of the year. The results of the study reinforce the idea that management of field boundaries can be used to manipulate the type and abundance of particular groups of predatory arthropods, and that seasonal patterns should be taken into account in schemes of integrated pest management so that any adverse effects of biocide application on these beneficial species may be minimised.

The findings of this study show that the type of predatory insects living on the edge of farmlands varies depending on whether the field is bordered by a fence or a row of trees.

These predatory insects play a major role in the control of harmful insects. The type of maintenance practised on field borders and the environment in which they are located can promote one or several species of predatory insects at the expense of one or more other species.

In an integrated pest management plan, the maintenance of a large abundance of predatory insects through appropriate management of field borders would help to minimize the use of pesticides in crops. 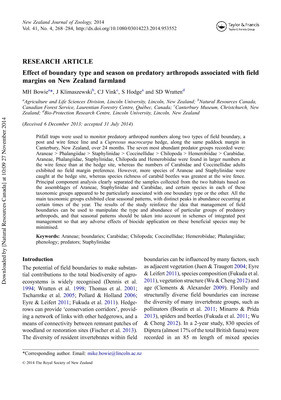