Nutritional variability in resources may cause differential mortality between sexes resulting in biased sex ratios. If males and females differ in fitness, then mortality of the more sensitive sex can cause a bias in sex ratios, and can stimulate dispersion of males. We reared three generations of spruce budworm (Choristoneura fumiferana (Clemens); Lepidoptera: Tortricidae) on two artificial diets: a ‘‘normal’’ diet that provided all nutritional requirements for development and a ‘‘stress’’ diet (deficient in sugars and slightly higher in nitrogen), that simulated deterioration of food quality during outbreak conditions and had a detrimental impact on larval survival, development and growth. We tested the effects of continued nutritional stress on the sex ratio of pupae and adults. We found biased sex ratios in favour of males related to diet. Low quality food resulted in fewer females. This distortion was observed from the second generation onward, with a lower percentage of females reaching the pupal and adult stage. These results provide evidence that nutritional variation causes differential mortality between sexes, suggesting that females are more sensitive to nutritional stress. This is the first study that demonstrates sex ratio distortion due to nutritional selection pressure in spruce budworm. Our results indicate the importance of studying sex ratio distortion of spruce budworm in outbreak conditions.

For the first time, this study shows the presence of an imbalance between the number of males and females following nutritional stress in the spruce budworm (SBW).

In the laboratory, the researchers evaluated the effect of a poor diet on the survival of SBW males and females. To do this, they raised three generations of SBW, feeding them with two artificial diets: a balanced diet, and a diet deficient in sugar and nitrogen. The latter simulated the decline in food quality during an infestation period and had a negative impact on larval survival, development and growth. This diet promotes the survival of males rather than females, the latter having greater nutritional needs. 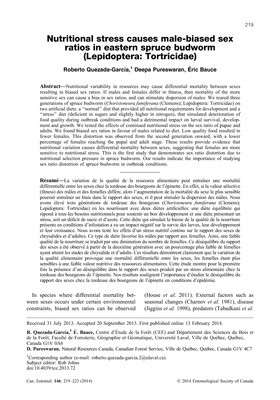