If a pair of flies were able to reproduce unimpeded for 5 years, the Earth’s surface would be covered with a 1.5-metre thick layer of buzzing insects. Fortunately, this could never happen because natural control mechanisms keep insect populations in check. Entomopathogenic fungi, which cause disease in insects, constitute an important control factor. These naturally occurring fungi, which target specific insects, are being used increasingly to control insect pests, and they may prove to be invaluable allies against pests like the emerald ash borer. Let’s see how Canadian Forest Service (CFS) researchers are making use of them.

This publication reports on the use of a pathogenic fungus to control emerald ash borer populations.

Canadian Forest Service researchers have developed a method for controlling populations of this exotic pest and slowing its spread in Canada. The method is based on the combined use of a modified insect trap and spores from a pathogenic fungus. Once the insect is contaminated by the spores present in the trap, it disseminates the spores to other insects during mating. In the laboratory, the researchers observed an 80% mortality rate within four days following contamination.

Also available under the title:
Controlling the emerald ash borer: The secret is in the fungi. Branching out from the Canadian Forest Service. No. 93. (English) 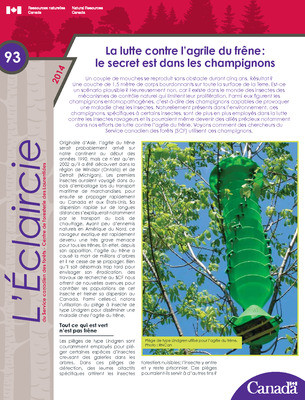