This study produced spatial models of growing season variables for Canada that span two centuries (1901-2100). Understanding and representing growing season variables from the past and into the future is important for many sectors including the forest sector. Growing season grids for the 1950-2010 period were generated by processing recently developed daily temperature and precipitation grids. High quality daily grids were not available prior to 1950 or for the future, growing season variables were estimated for these periods from a suite of 57 climate and water-related predictors using a modern statistical technique called boosted regression trees (BRT). Errors associated with both approaches were reasonable; for example, the mean absolute error for growing season start date was about 6 days for the daily-based product and about 10 days for the BRT approach. We further compared the two approaches by calculating trends in growing season length for the period 1950-2010. Significant increases in growing season length were obtained for nearly all ecozones across Canada and there were no significant differences in the slopes obtained from the two approaches. This work is part of an ongoing effort to provide spatial climate data for Canada; it can be accessed directly at http://cfs.nrcan.gc.ca/projects/3 or through data requests to the corresponding author. 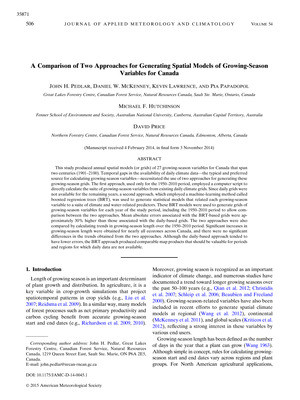