We used remote video cameras to assess seasonal diet composition of woodland caribou (Rangifer tarandus tarandus (L., 1758)) at three areas across the boreal forest of Ontario. Caribou consume lichens in winter, but we expected they would significantly reduce lichen consumption in favour of higher protein levels in green plants in summer. We sampled videos from 23 caribou, from 2 years, to derive seasonal diet composition. Diet differed among seasons and study areas, except in winter when lichens dominated. Diet breadth doubled from winter to summer, but overlap between seasons was still >60%. Green plants were less commonly eaten than we expected, only three genera were preferred, and few species constituted more than 2% of the diet. Preferred foods varied by land-cover types. Diet differed between managed and unmanaged landscapes but did not result from use of plant species found in successional habitats. Caribou selected a nonoptimal diet in the snow-free seasons, especially with respect to protein, suggesting factors other than nutrition influenced diet choice, and indicating the possibility of bottom-up limitation on production.

We used remote video cameras over a two-year period to assess seasonal diet composition of 23 woodland caribou at three areas across the boreal forest of Ontario. Diet varied by season, land-cover types, study areas and between managed and unmanaged landscapes. Caribou consumed lichens in winter and in summer but, in the summer, consumed less of the higher protein green plants than we had expected. This suggests that factors other than nutrition, such as predator avoidance, influenced their choice of diet. We conclude that woodland caribou require habitats that supply lichens in abundance. Lichen species are grazed selectively and only the top one or two centimetres are consumed, so the total available biomass is much smaller than what has been considered previously. As some stands become functionally unavailable owing to disturbances or the presence of predators in disturbed landscapes, it is possible that lichen availability may well become limiting in a synergistic manner with other factors that restrict habitat use. 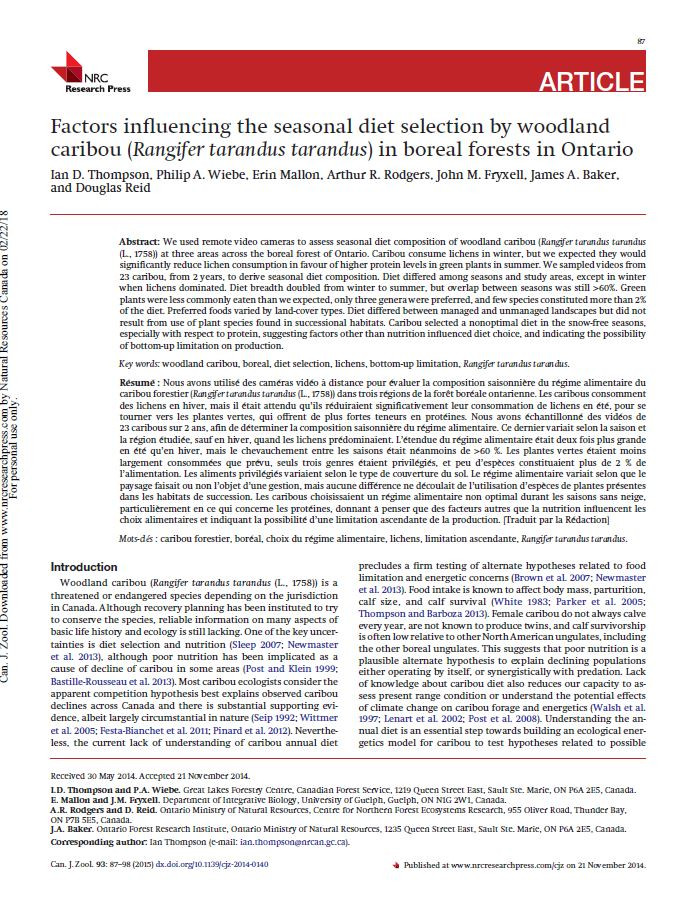