In the southern boreal forest of Québec, jack pine (Pinus banksiana Lamb.) stands occur in two habitat units, mainland and island. These two habitats have historically experienced different fire regimes. In frequent lethal fires characterize the mainland, while frequent non-lethal and infrequent lethal fires characterize the islands. Previous studies have shown that highly serotinous jack pine trees tend to dominate on the mainland, while intermediate and non-serotinous trees are more abundant on the islands. A comparison of morphological characters describing tree form, cone morphology and reproductive output was made on 14 mainland and 10 island stands in an effort to determine if they exhibited variation consistent with variation in fire regime and serotiny. Generally, mean values of the morphological and reproductive characters measured did not vary between the two habitats, nor did bark allometry. Live crown height to tree height ratio, as a function of tree age, and cone number as a function of tree height varied between the habitats. Relatively old mainland trees had a shorter crown in relation to tree height than their island counterparts. Cone number increased faster with tree height for island versus mainland trees. Island trees exhibited earlier reproduction than did mainland trees: in the island habitat the percentage of cone bearing trees (55 %) in the youngest age class (<21 years) was significantly greater than in the mainland habitat (34 %). Mainland populations were fire-resilient with a high degree of serotiny. Island populations behave like fire-resistant/fire-surviving species with a low degree of serotiny and earlier reproductive investment.

In Quebec’s southern boreal forest, jack pine stands are found on the mainland or on islands. These two types of habitat are not subject to the same fire conditions: on the mainland, fires are sporadic and cause mortality in all trees; on the islands, fires are more frequent, but less lethal.

Jack pine cones are composed of scales held tightly together by resin. For the cones to open and release their seeds, they must be exposed to high heat (fire or sun). In this study, the researchers demonstrated that jack pines growing on islands have adapted to the fire conditions prevailing there: they have more cones that open without heat from fire; therefore, they regenerate earlier than jack pines growing on the mainland. The latter have also adapted to fire by having a majority of cones remaining closed until fire causes them to open.

This study shows that species can adapt to distinct fire regimes, even across short distances. 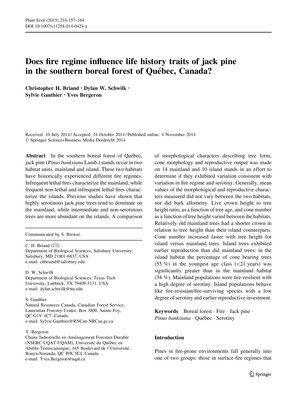