Since its introduction from Europe, balsam woolly adelgid [Adelges piceae (Ratzeburg) (Hemiptera: Adelgidae)], a phloem-sap feeder, has spread throughout the balsam fir [Abies balsamea L. (Mill.)] forests of eastern Canada. Trees under A. piceae attack develop ‘‘gout’’ and differ from unattacked trees in physiology, morphology, growth, and chemistry. The native and eruptive eastern spruce budworm [Choristoneura fumiferana (Clem.) (Lepidoptera: Tortricidae)] also attacks fir, causing severe defoliation during outbreaks. While balsam woolly adelgid and budworm feed at different times and on different host tissues, such spatiotemporally separated herbivores may still interact via host-mediated indirect effects. We examined the relationship between gout and the performance of developing budworm larvae in balsam fir dominated stands in western Newfoundland. We tested for adelgid–budworm interactions in unthinned and precommercially-thinned (~20 years past) stands, because the host’s growing condition can affect foliage composition and herbivore performance. Budworm attained lower pupal weight when reared on trees with high levels of gout. In unthinned stands moderate gout reduced budworm survivorship, but there was no such effect in thinned stands. Gout did not affect budworm sex ratio. Although our data are consistent with interactions mediated by foliage quality (rather than quantity), and although budworm survivorship was associated with several aspects of foliage chemistry (Mg and N, positive; monoterpenes, negative), we were unable to identify specific host quality changes underlying the adelgid–budworm interaction. Our study demonstrates that A. piceae attack is an important factor influencing budworm performance, and it should be considered when analyzing budworm population dynamics and when developing management protocols for forests impacted by A. piceae attack.

This study demonstrates that attacks by the balsam woolly adelgid could slow the progression of spruce budworm (SBW) populations.

The attack of these adelgids causes swelling and a deformation known as "gout" in fir shoots. The presence of gout negatively affects the quality of food for the SBW and, consequently, the weight of SBW larvae decreases, as does the survival rate of the insect.

The cumulative impact of these two insects should therefore be taken into account when studying the population dynamics of the SBW and when developing control strategies.

The balsam woolly adelgid, originating from Europe, and the SBW, a native insect, are both found in the fir stands of eastern Canada. They feed on different parts of the tree and do not attack at the same time.

This study took place in the western part of the island of Newfoundland. 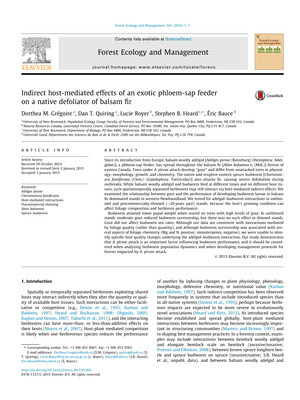