One-year-old white spruce (Picea glauca) seedlings were studied in microgravity conditions in the International Space Station (ISS) and compared with seedlings grown on Earth. Leaf growth was clearly stimulated in space whereas data suggest a similar trend for the shoots. Needles on the current shoots of ground-based seedlings were more inclined towards the stem base than those of seedlings grown in the ISS. Amyloplasts sedimented in specialized cells of shoots and roots in seedlings grown on Earth while they were distributed at random in similar cells of seedlings tested in the ISS. In shoots, such amyloplasts were found in starch sheath cells located between leaf traces and cortical cells whereas in roots they were constituents of columella cells of the cap. Nuclei were regularly observed just above the sedimented amyloplasts in both organs. It was also frequent to detect vacuoles with phenolic compounds and endoplasmic reticulum (ER) close to the sedimented amyloplasts. The ER was mainly observed just under these amyloplasts. Thus, when amyloplasts sediment, the pressure exerted on the ER, the organelle that can for instance secrete proteins destined for the plasma membrane, might influence their functioning and play a role in signaling pathways involved in gravity-sensing white spruce cells.

In this study, the researchers observed that the absence of gravity affects the growth of needles and shoots of young white spruce seedlings. These plants were kept at the International Space Station for 30 days. Concretely, the researchers observed that the needles of spruce trees on Earth had more of an incline near the base of the stems than those of space spruce trees.

At the point where the needle connects to the stem, there are cells containing particles that sediment under the influence of gravity. This sedimentation would notably help stems to stand erect. These cells, which are sensitive to gravity, would thus allow the tree to combat the effect of gravity by promoting its upward growth. 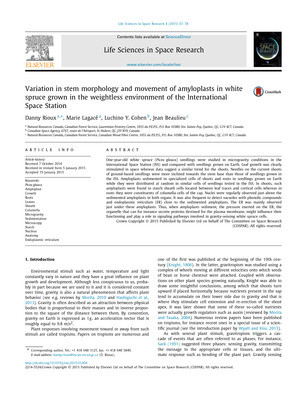