In many insect species, sperm-depleted males (SDMs, i.e. males that have exhausted their sperm after a given number of matings) remain sexually active and continue to mate females. Here, we investigated the behavioural modifications that occur in both sexes of the parasitoid Asobara tabida Nees (Hymenoptera: Braconidae), after matings by fertile males and sperm-depleted males. We show that (i) virgin females, mated females and females mated to a SDM exhibited different behaviours and that (ii) males responded differently to females depending on whether the females had previously mated with an SDM or not. Our findings demonstrate that SDM influenced the reproductive behaviour of both males and females, especially with regard to male responsiveness and female attractiveness. These findings are discussed in the context of adaptive behaviour and fitness maximization in both males and females.

This study showed that the mating process in females of Asobara tabida, a parasitoid of Drosophila (small fruit flies), is affected by sperm-depleted males.

Indeed, during successive matings, Asobara males eventually deplete their sperm reserves, but can continue to mate. The females that mate with these males are no longer attractive to males with intact sperm reserves, which reduces their mating success.

This study will help to improve our knowledge of the reproductive strategies of parasitoids. 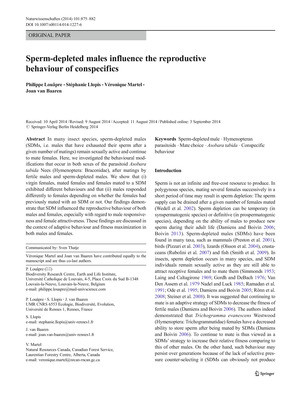