Ichnoviruses (IVs), unique symbiotic viruses carried by ichneumonid campoplegine wasps, derive from integration of a paleo-ichnovirus into an ancestral wasp genome. The modern ‘genome’ is composed of both regions that are amplified, circularized and encapsidated into viral particles and nonencapsidated viral genomic regions involved in particle morphogenesis. Packaged genomes include multiple circular dsDNAs encoding many genes mostly organized in gene families. Virus particles are assembled in specialized ovarian cells from which they exit into the oviduct lumen; mature virions are injected during oviposition into the insect host. Expression of viral proteins in infected cells correlates with physiological alterations of the host enabling success of parasitism.

This study showed that when a campoplegine wasp parasitizes a caterpillar of the Lepidoptera family, a group of insects that includes the spruce budworm, it lays its eggs and injects a virus into the caterpillar. The injection of this virus is essential to the survival of the wasp’s eggs, as the virus blocks the caterpillar’s immune response against foreign bodies.

Studying the genes of this virus could lead to the development of control methods against pests. 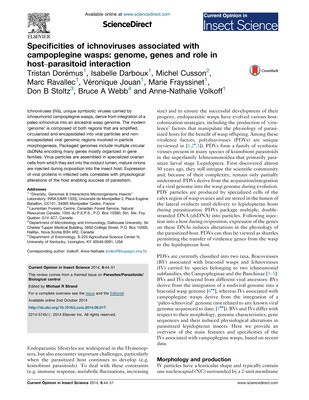