The hemlock looper (Lambdina fiscellaria) is an important pest of eastern Canadian forests. The ongoing climate warming could modify the seasonal ecology of this univoltine species that lays eggs at the end of summer and overwinters at this stage. Indeed, the increase in frequency and intensity of extreme climatic events such as fall heat waves could interfere with the winter metabolism of the hemlock looper. Moreover, the host plant quality, which influences the quantity of insect energetic reserves, the geographic origin of populations and the conditions prevailing during the cold acclimation period, could cause various responses of this pest to climate warming. The main objective of this study is to determine the impact of these factors on hemlock looper winter biology. In October 2010, hemlock looper eggs initially collected from two geographic areas in the province of Québec, and from parents reared on two host plants, were exposed to fall heat waves of different intensities during 5 consecutive days. Supercooling points and cryoprotectant levels were measured on eggs on four different dates in 2010–2011 and survival rate was measured in April 2011. Our results show that hemlock looper eggs have a very low supercooling point and high levels of trehalose, glucose and mannitol in September and November. However, there is no clear relationship between the concentration of these compounds and the decrease in supercooling points. Contents in trehalose, glucose and mannitol were significantly influenced by fall heat waves and by the origin of the population. Winter survival of eggs from the temperate population was negatively affected by strong heat waves while the boreal population was not affected. This study suggests that the metabolism and winter survival of temperate hemlock looper populations in Québec will be more affected by fall heat waves that will increase in frequency due to climate change, than boreal populations.

The results of this study show that heat waves in the fall reduce hemlock looper eggs’ winter survival in temperate regions, but not in the boreal region.

One of the objectives of this study was to examine whether climate warming could change the level of risk associated with damage caused by the hemlock looper. The increase in extreme events such as fall heat waves can disrupt the metabolism of this insect and make it more vulnerable to low winter temperatures. This is not the case, however, for populations in the boreal region, where most outbreaks are observed and where the risk remains high. In the boreal region, populations have adapted to the cold and have fewer natural enemies. 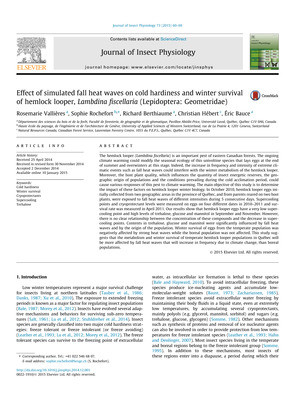