Undescribed exotic and scientifically unknown fungal species with the potential to be pathogens are often difficult to detect on imported live plant material due to their inconspicuous nature and thus represent an important risk to Canadian forests. We have developed an early warning method based on a random sampling of asymptomatic woody live plant material imported into Canada to detect such potential alien fungal species. We received 150 asymptomatic sample lots collected by Canadian Food Inspection Agency (CFIA) inspectors. Samples were analysed by cloning and sequencing the PCR-amplified fungal nuclear ribosomal internal transcribed spacer (ITS) DNA from plant tissues to reveal fungal diversity. Out of 1845 fungal clones obtained, 267 fungal operational taxonomic units (OTUs) were identified. Using phylogenetic profiling methods, two fungal OTUs were categorized as having potential for a moderate impact on Canadian forests, 37 OTUs had a low impact and 18 OTUs could not be assessed given their low genetic similarity with other ITS sequences in GenBank. In all cases, the potential risk associated with these 57 fungal OTUs is based on (i) the fact that they can be considered unknown species to science; and (ii) they belong to orders, classes, genera and families in which pathogenic species are common. Fungal introductions with potential for a moderate impact on Canadian forests were observed at a very low frequency (0.2%) in the sampling units (clones). Only 1.3% of the CFIA samples had an OTU with a potential moderate impact on Canadian forests and 74% of the samples were free of fungal OTUs that could have any potential impact. This early warning method sheds light on the suite of exotic fungi that may enter Canada via plant material. Additionally, this method provides the tools to assess the potential risk that these fungi may post to Canadian trees and determines the magnitude of asymptomatic material that harbours fungal pathogens.

The import of live plants may lead to the introduction of fungi that cause diseases in Canadian forest trees. The potential hazard comes from the fact that some common species of fungi that cause no symptoms on trees abroad become virulent pathogens upon their arrival in America. This threat, although it has always existed, is growing with increasing trade, especially between China and the rest of the world. Moreover, species of exotic fungi unknown to science are difficult to detect in these plants. To mitigate this difficulty, the researchers have developed an early warning method. This method is based on the detection of fungi in a random sample of live woody plants imported into Canada that do not show any disease symptoms. The samples were provided by inspectors from the Canadian Food Inspection Agency. The potential impact of these fungi on forests may be unknown, nil, low, moderate or severe. 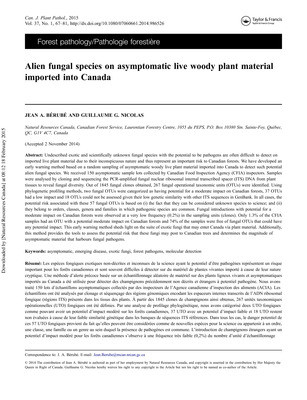