Aim Towards the cold margins of the Northern Hemisphere boreal zone, continuing warming should theoretically provide a longer vegetative season, favouring growth and a northward shift in tree species distribution. The northern distribution of Thuja occidentalis L. (eastern white cedar) is marked by the presence of isolated marginal populations distant from the continuous distribution. If those populations proved to be well adapted to their future local climatic conditions, their expansion could accelerate cedar poleward migration. We tested the hypotheses that (1) there will be a growth increase in cedar northern marginal populations as a result of global warming, and (2) the edaphic conditions and regional precipitation regimes will modulate their response to warming. Location Canadian boreal forest, western Quebec (47–50° N, 74–80° W). Methods We investigated radial growth using tree-ring measurements from dominant and co-dominant eastern white cedar trees (n = 723) distributed along a latitudinal gradient from the species’ northern margin to the centre of its natural range. First, low-frequency growth variations were analysed on whole chronologies (ad 1720–2010). Second, inter-annual growth variations were tested against ad 1953–2010 monthly temperature and precipitation time series with a bootstrapped correlation function. Finally, the impact of environmental variables on the growth–climate relationships was assessed. Results Unexpectedly, a growth decline was observed starting in 1980 in marginal sites. Dendroclimatic analyses revealed that radial growth was not only limited by short growing seasons but also by summer droughts in the marginal zone. This response was exacerbated in sites that received less summer precipitation. Counterintuitively, autumn and spring precipitation negatively impacted on growth, especially in wet soil stands. Main conclusions Northern marginal populations of cedar may have already reached their optimum temperature threshold for radial growth. Our results suggest that they will probably be facing increasing hydric stress selection pressure under the assumptions of climate change. Their responses to future warming will be highly dependent on the seasonality and magnitude of variation in precipitation regimes.

This study demonstrated that climate warming in regions located north of the 47th parallel did not promote a higher growth rate for Thuya occidentalis (commonly called white cedar), unlike what the researchers had initially thought.

By studying tree growth rings, the researchers were able to determine that white cedar growth in this region had decreased instead of increased with the increase in temperatures. This phenomenon was partly due to the increased number of summer droughts and the higher amounts of precipitation in the spring and fall attributable to climate change. These difficult conditions lead to a reduction in white cedar growth. 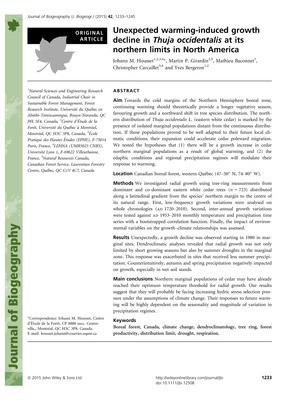