Mitigating risks of future wildfires by management of the forest composition: an analysis of the offsetting potential through boreal Canada. 2015. Girardin, M.P., Terrier, A. Climatic Change.

Wildfire activity is projected to increase through upcoming decades in boreal Canada due to climatic changes. Amongst the proposed strategies to offset the climate-driven fire risk is the introduction of broadleaf species into dense-coniferous landscapes so as to decrease the intensity and rate of spread of future wildfires. Here we examine this offsetting potential through boreal Canada by searching for optimal conifer to broadleaf conversion rates that would stabilize the burn rate metric, and an upper bound for the maximum potential effect. We developed an empirical model relating regional burn rates to mean annual fire weather conditions and tree genus proportions, and applied it to regional climate and forest composition change scenarios covering the interval from 1971 to 2100. Results suggested that many areas in the southern and northern boreal regions will record either a constant or a decreasing burn rate and, therefore, will not require a change of forest composition. Besides, a conversion rate of 0.1 to 0.2 % year-1 starting in year 2020 was sufficient to maintain burn rates constant across much of the southern boreal forest. In northern forests, however, higher conversion rates were required to meet the fire objectives (0.3 to 0.4 % year-1). This mitigation option will be difficult to implement over northern forests given the size of areas involved. Nonetheless the estimated conversion rate for much of the southern boreal forest is attainable, considering that harvesting and industrialization during recent decades have already contributed to similar changes of the proportion of broadleaf species in boreal landscapes.

The introduction of hardwoods into coniferous stands may reduce the intensity and spread rate of fires caused by climate change. The percentage of hardwoods to be introduced each year, starting in 2020, varies by region: between 0.1% and 0.2% in the southern part of the boreal forest and between 0.3% and 0.4% in the northern part. This would be sufficient to maintain burn rates similar to those of today, although these values vary, depending on greenhouse gas emission scenarios.

To obtain these findings, the researchers developed a model integrating fire frequency, weather conditions and forest composition. They applied the model to the boreal forest using various climate change scenarios between 1971 and 2100. 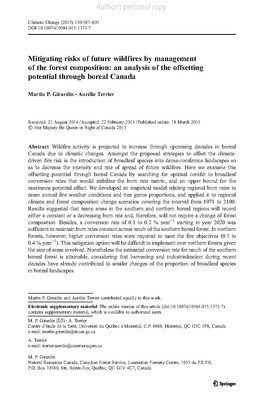