Mixedwood forests occupy a large extent of boreal regions and have the potential for sequestering large amounts of carbon. In the context of forest ecosystem management, partial cutting prescriptions are increasingly being applied to boreal mixedwood stands. Partial harvesting is expected to maintain carbon pools and dynamics within the limits of those of natural stands. Changes in live tree, deadwood (standing snags, downed logs), forest floor and mineral soil carbon pools were assessed over a 9-year period in a replicated large-scale experiment, which included unharvested controls, two variants of partial harvesting and clear-cuts. We also measured leaf litter and deadwood inputs and decay rates. Carbon flux through leaf litterfall recovered rapidly following partial harvesting. Carbon flux from live trees to deadwood pools was a dominant process in partially harvested stands where snags and downed log carbon pools remained similar to those of natural stands. Hence, the nature of litter inputs diverged strongly among clear-cut and partially harvested treatments. Leaf and wood decay rates were higher in the partial cuts and controls than in clear-cuts. No significant differences in forest floor and mineral soil carbon were observed 9 years after harvesting. Carbon sequestration in live tree biomass was the carbon pool that most strongly differentiated the treatments allowing partial harvesting to maintain forest stands as net carbon sinks.

Over a nine year period, the researchers studied carbon distribution in boreal mixedwood forests (consisting of deciduous and coniferous trees) following four treatments: no cutting; partial cutting at two different intensities; and clearcutting. The following are the main findings of their comparison of the effects of the two types of partial cutting on carbon, compared with the other treatments.

Carbon flux into the ground : The type of litter inputs into the soil resulting from the two types of partial cutting and clearcutting varied substantially. In the cut stands, the quantity of leaf litter quickly became equal to that of the non harvested stands. However, during the nine year post cutting period, the production of dead wood in the partially cut areas was similar to that observed in the non harvested stands, but was practically nil in the forests that had been clearcut. The result is that the quality of the litter falling to the ground in clearcut forests is different from that resulting from the other treatments.

Carbon in the ground : None of the treatments had a detectable impact on mineral soil carbon.

Carbon capture by the forest ecosystem : After partial cutting, the forest continues to be a carbon sink, whereas it becomes a source for a few years in clearcut stands. An analysis at forest management unit scale is necessary in order to ascertain the consequences for carbon fluxes across a large forested area. 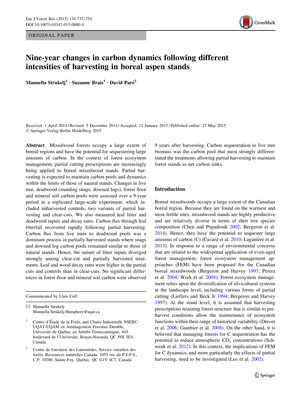