The variation in nitrogen, insoluble and soluble proteins, and chlorophyll concentrations (mg·g-1) and contents per unit leaf area (mg·cm-2) as a function of specific leaf area (SLA) was examined in leaves sampled at the bottom, middle, and upper sections of the crowns of balsam fir (Abies balsamea) and black spruce (Picea mariana) trees located along a temperature gradient in Quebec, Canada. Differences in needle dimensions, mass, surface, and SLA among crown sections and needle age were more pronounced for balsam fir than for black spruce. Relationships of foliage nitrogen, insoluble and soluble proteins, and chlorophyll content per unit leaf area as a function of SLA were generally more significant than those based on concentration. However, the different variables varied little along a temperature gradient. The higher significance of area-based relationships in comparison with mass-based relationships was attributed to the change in leaf morphology in response to light availability within the crown. Yet, nitrogen availability most likely restricted light acclimation to changes in morphology, since there was very limited modulation of nitrogen partitioning among the different protein fractions as a function of light environment.

Through this study, the researchers found that light availability to tree needles is a factor that limits their content in nitrogen, some proteins and chlorophyll. They also noted morphological differences in needle distribution between balsam fir and black spruce.

This information will contribute to the development of models that can be used to examine the impact of certain disturbances that alter light conditions on tree physiological properties. 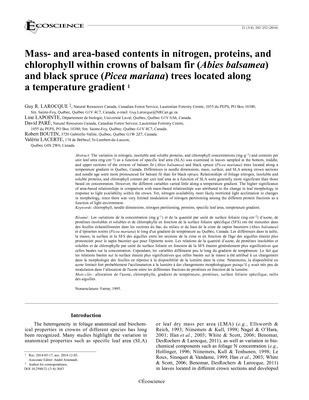