Questions: High moisture levels and low occurrences of wildfires have contributed during recent millennia to the accumulation of thick layers of organic soil and to a succession into open black spruce (Picea mariana)–Sphagnum-dominated forests in the Clay Belt boreal landscapes of eastern North America. In these forests, the anticipated increase in drought frequency with climate change could lead to a shift in forest structure and composition via increased fire disturbance. Here, we quantify the expected changes in fire behaviour, biomass burning and vegetation composition in the Clay Belt forest of North America that could arise under climate change over the next century. Location: A managed forest unit in the Clay Belt boreal forest of eastern North America. Methods: The impact of a changing climate from 1971 to 2100 on fire regime characteristics (i.e. rate of spread, fuel consumption, fire intensity, type of fire and depth of burn) and vegetation dynamics (mortality and recruitment) was investigated using the Canadian Fire Effects Model (CanFIRE). Vegetation dynamics were governed by the fire danger and behaviour that affect tree mortality and post-fire recruitment of species, and by long-term successional pathways that are driven by post-fire recruitment and forest age. An ensemble of two climate models forced by three scenarios of greenhouse gas emissions was used to drive CanFIRE simulations. Results: Results from multiple scenarios suggested that fire danger will increase significantly during the 21st century in the Clay Belt forest. The burn rate was projected to change from 4.2% decade -1 during 1971–2000 to 18.6% decade-1 during 2071–2100. Stand mortality, fire intensity and areas affected by crown fires were also projected to increase. A shift in forest composition did not occur over the simulation period across most of our fire regime scenarios. Dominance of open black spruce–Sphagnum forests was projected to remain in future landscapes. Conclusions: Moist and cool conditions in these forests prevent high depth of burn and contribute to the ecological resistance of these forests to increasing fire danger.

In this study, the researchers demonstrated that some boreal forests in eastern Canada have moisture and cold conditions such that the anticipated high frequency of fires due to climate change over the next century will not have an impact on accumulated organic material in the soil. However, canopy dieback and fire intensity will increase and be more difficult to control.

These black spruce dominated forests are found in the Clay Belt, a region located in the northern part of Abitibi, Quebec and in northeastern Ontario. In this region, the main reason for low black spruce productivity is paludification caused by the accumulation of organic matter in the soil. The high moisture rate and low occurrence of fire have promoted this accumulation. 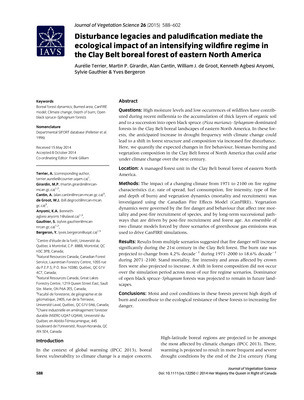