The ecology and management of boreal forest ecosystems are drawing greater attention worldwide as their importance is being increasingly recognized for carbon sequestration or for harbouring the world’s largest remaining intact forests. Selection cuts have been introduced as a more socially acceptable silvicultural method to improve the maintenance of habitat structure and functions as they mimic aspects of boreal forest succession dynamics. Many studies have shown that selection cutting helps maintaining arthropod communities in mature forests, but few have examined the increased risks of damage by bark- and wood-boring insects in boreal forests of eastern North America. We used multidirectional flight-interception traps to quantify the response of these beetles to 25 and 40% selection cutting in a balsam fir–white birch forest of Quebec, Canada. The abundance and species number of both cerambycid and scolytid beetles were 5–6 times larger in selectively cut stands than in controls the year following treatments. Analyses revealed that bark- and woodboring beetles’ response was mostly associated with increased canopy openness in selectively cut stands (and sun-exposed locations within them) and residual tree injuries caused by harvesting operations. These conditions attracted beetles such as Trypodendron lineatum (Scolytinae) and Rhagium inquisitor (Cerambycidae), two species known for their ability to attack weakened, dying and dead hosts. Most species were more abundant in selection cuts, except for Evodinus m. monticola (Cerambycidae) whose abundance was strongly reduced after treatment. Some beetles can have detrimental effects on residual trees and thus could reduce timber value, but most species found in treated stands do not represent a high risk for healthy trees. Thus, selection cuts do not seem favourable to the establishment of tree-killing beetles. However, as they were found more active/abundant after selection cutting, it would be wise to further study their population dynamics over mid- and long-term periods, along with the ecological and economic implications associated with this silvicultural treatment.

In this study conducted in Quebec’s balsam fir–white birch subdomain, the researchers demonstrated that partial cutting did not appear to promote the establishment of harmful insects in healthy trees.

In partially cut areas, the majority of bark beetle and longhorned beetle species were five to six times more abundant than in unharvested areas. However, most of these species do not cause damage to healthy trees. This increase in population levels or species activity observed during the year following cutting can be attributed to an opening in the forest canopy (more exposure to sunlight) and to a greater number of trees injured during logging operations (thus more entry points for insects). The medium- and long term response of harmful insects to these new forest conditions remains to be determined. 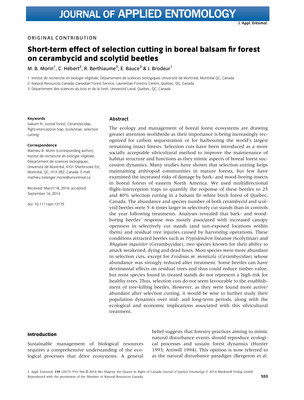