By using a simulation model, researchers can explain the effects of climate change observed in western North America (19502012) on the current mountain pine beetle outbreak plaguing the region since the early 2000s.

To study the dynamics of mountain pine beetle populations, researchers have created a model combining the effects of temperature on insect development, reproduction and overwintering. This model is used to study the impacts of climate change on distribution and the likelihood of outbreaks of this insect in North American forests. The model has been calibrated to correspond to observations made between 2001 and 2012 on forest sites in the northwestern United States and on insect populations observed in Idaho between 1992 and 2004.

Given that mountain pine beetles have now invaded the boreal forests of central Alberta, this model will be used to predict the insect’s growth rates in boreal forests of eastern North America while taking various climate change scenarios into account. The model is structured to take other processes into account, such as mass migrations and genetic adaptations of this insect. 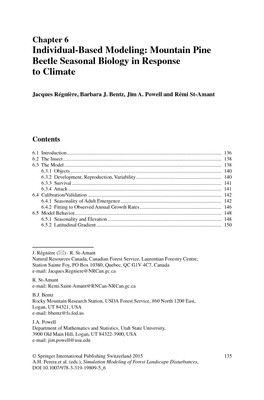