Spruce budworm (SBW) is the most serious insect pest attacking Canada’s balsam fir stands. It is capable of making migratory flights over distances of up to 500 km. After laying a portion of their eggs, the fertilized females become as light as the males and fly with them in the upper atmosphere. The winds carry them towards stands that they hope will be more favourable to the development of the eggs that they still have to lay. As a result, budworm moths disperse and create new outbreaks. Canadian Forest Service (CFS) researchers recently discovered that red mites (Leptus triati) offer a way to track the routes followed by the moths during their migrations. What is this discovery all about?

This publication reports on the use of red mites to monitor spruce budworm (SBW) migration.

Canadian Forest Service researchers have discovered that red mites in the larval stage live as parasites on the adults of several insect species. During field studies, this parasitism was observed on SBW, and the researchers noticed a similar rate of parasitism occurring at the same time in two different locations. The presence of red mites on SBW would thus help obtain a better understanding of the spatial and temporal evolution of outbreaks.

Also available under the title:
Spruce Budworm: Pursued by Red Mites. Branching out from the Canadian Forest Service, Laurentian Forestry Centre. No. 95. (English) 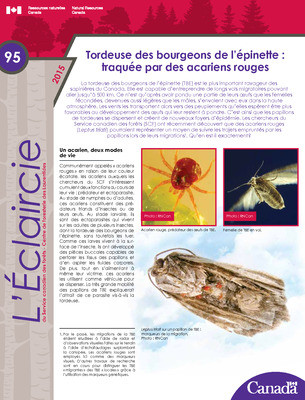