Located in Quebec City at the Laurentian Forestry Centre of the Canadian Forest Service (CFS), the René-Martineau Insectarium is the leading documentation centre on forest insects in Quebec and eastern Canada. It was named in honour of CFS researcher René Martineau, who dedicated his life to forest entomology research.

This publication reports on the role of the René Martineau Insectarium in Canadian Forest Service activities. The René Martineau Insectarium was established in 1999 to promote education and research in areas such as biodiversity, taxonomy and forest insect ecology. The collection includes nearly 200,000 specimens that can be studied on site. Many research projects make use of the Insectarium’s resources, such as studies of the effects of biomass harvesting on biodiversity. Branching Out is a series of plain language fact sheets describing Laurentian Forestry Centre research projects

Also available under the title:
The René-Martineau Insectarium: a Library of Insect. Branching out from the Canadian Forest Service, Laurentian Forestry Centre. No. 96. (English) 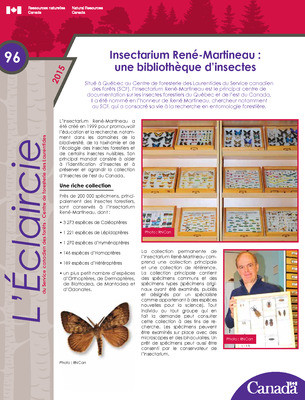