Impaired soil quality due to compaction and organic matter removal following forest harvesting and mechanical site preparation is of concern, especially on calcareous soils which are believed to be particularly sensitive to disturbance. This study set out to determine the effects of organic matter removal and compaction on soil quality and seedling productivity on calcareous soils of a localized disturbance landscape (2.25 m²). Here we report ten year post-establishment results of Douglas-fir (Pseudotsuga menziesii (Mirb.) Franco) and lodgepole pine (Pinus contorta var. latifolia Engelm.) seedlings across four sites in southern British Columbia, Canada with eight treatment levels incorporating different quantities of organic matter removal and soil compaction. Pine seedlings suffered high rates of mortality when planted in deposits across all sites while Douglas-fir seedling mortality was high when planted in compacted undisturbed treatments at two sites and in deposits on the remaining sites. Douglas-fir volume was greatest on the deposit treatment regardless of site but grew significantly better on the non-calcareous site. Pine seedlings outgrew Douglas-fir seedlings and, after ten years, seedlings were largest on a mildly calcareous site. Seedling growth was generally found to be negatively affected by calcareous soils and compaction; however, the specificity of results, in terms of species and site interaction and changing response as the seedlings aged, reinforced the importance of treatment effects on soil quality and forest productivity across the entire length of a stand rotation.

Researchers from Natural Resources Canada and the BC Ministry of Forest, Lands and Natural Resources Operations established experimental sites in the East Kootenay Region of BC to study the effects of soil compaction and displacement (gouges and deposits) on tree growth across four sites ranging in depth to carbonates. Excavator operators treated harvested areas with eight combinations of soil disturbances; tree planters then planted each plot with native conifer species. The researchers from the two ministries created these trials to complement a long-term international project, established in the 1990s, investigating the impacts of soil compaction and organic matter removal on forest productivity. The research plots were established adjacent to five of these long-term project sites. The key results of the study indicated that calcareous soil and compaction negatively affected seedling growth and Douglas-fir seedlings were more sensitive to treatments than lodgepole pine. Further monitoring of these sites is required to understand the long-term implications of compaction and organic matter removal on forest succession and productivity following harvesting on calcareous soils. 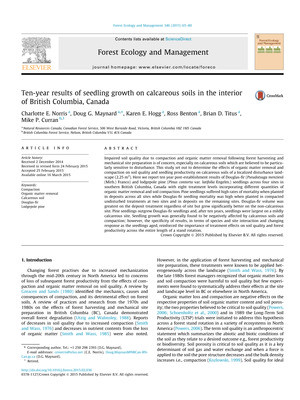