Climate change is altering insect disturbance regimes via temperature-mediated phenological changes and trophic interactions among host trees, herbivorous insects, and their natural enemies in boreal forests. Range expansion and increase in outbreak severity of forest insects are occurring in Europe and North America. The degree to which northern forest ecosystems are resilient to novel disturbance regimes will have direct consequences for the provisioning of goods and services from these forests and for long-term forest management planning. Among major ecological disturbance agents in the boreal forests of North America is a tortricid moth, the eastern spruce budworm, which defoliates fir (Abies spp.) and spruce (Picea spp.). Northern expansion of this defoliator in eastern North America and climate-induced narrowing of the phenological mismatch between the insect and its secondary host, black spruce (Picea mariana), may permit greater defoliation and mortality in extensive northern black spruce forests. Although spruce budworm outbreak centers have appeared in the boreal black spruce zone historically, defoliation and mortality were minor. Potential increases in outbreak severity and tree mortality raise concerns about the future state of this northern ecosystem. Severe spruce budworm outbreaks could decrease stand productivity compared with their occurrence in more diverse, southern balsam fir forest landscapes that have coevolved with outbreaks. Furthermore, depending on the proportion of balsam fir and deciduous species present and fire recurrence, changes in regeneration patterns and in nutrient cycling could alter ecosystem dynamics and replace black spruce by more productive mixedwood forest, or by less productive ericaceous shrublands. Long-term monitoring, manipulative experiments, and process modeling of climate-induced phenological changes on herbivorous insect pests, their host tree species, and natural enemies in northern forests are therefore crucial to predicting species range shifts and assessing ecological and economic impacts.

This literature review speculates that climate change could have an impact on the development cycle of the spruce budworm (SBW). This impact would also have an effect on SBW interactions with the trees it attacks and with its natural enemies. These changes could cause an increase in the severity and duration of outbreaks.

The period during which SBW larvae emerge in spring coincides with budbreak (when buds open) in its hosts. For example, the insect’s emergence is better synchronized with the opening of balsam fir buds, making this species the insect’s preferred host. However, climate change could contribute to changing this relationship. It appears that the current SBW outbreak began further north than previous outbreaks (north of the 49th parallel). However, this region is mainly dominated by black spruce, which has a different budbreak period than balsam fir. Anticipated changes in the SBW’s development cycle and earlier budbreak in black spruce would mean that the SBW cycle would coincide more with the budbreak period of black spruce than with that of balsam fir. The relationship with its natural enemies could also be disrupted.

SBW outbreaks are the most severe disturbances affecting the boreal forest. 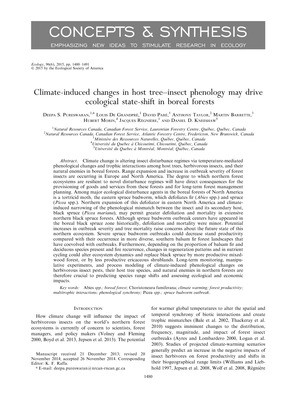