This progress report presents the first analyses of a study started in July 2012 in the Laurentian Wildlife Reserve, Quebec, where defoliation was noticed in balsam fir stands of the Montmorency Forest, which is owned by Laval University and serves for teaching purposes and experimental research. The Hemlock Looper (HL) and the Rusty Tussock Moth (RTM) were then both observed in the area. Our data show that the HL was responsible for observed defoliation. Also, there was no correlation in the abundance of these two species in sampled stands. The RTM population collapsed due to a disease but HL defoliation continued in 2013. Pure balsam fir stands were more defoliated than any other stand type. Over mature stands were generally more susceptible but mature and young stands were also affected by the HL. Irregular stands were the least affected ones. Egg estimates on foam traps were significantly correlated with those obtained from branches. We used successfully fall 2012 egg estimates from foam traps to predict 2013 defoliation at the stand level. These predictions could be improved by adding other variables, the best predictions involving latitude and estimates of pupal populations and interactions between variables. Estimates of egg mortality indicate very low levels of parasitism by Telenomus spp with some southern stands showing higher levels, suggesting climatic constraints for this parasitoid. Winter HL egg mortality was generally high but variable. Historic data from Montmorency Forest show that the frequency of harsh winters decreased over the last 50 years, suggesting that climate warming could be linked with the ongoing HL outbreak in the Laurentian Wildlife Reserve. 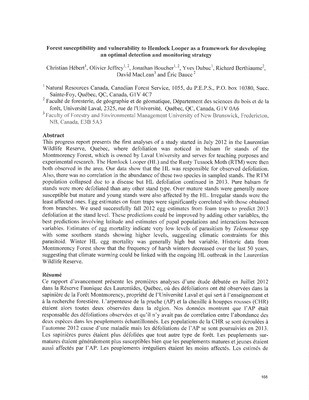