Fire plays an important role for boreal forest succession, and time since last fire (TSLF) is therefore seen as a useful covariate to devise forest management strategies, but TSLF information is currently either spatially or temporarily limited. We therefore developed a TSLF map for an extensive region in eastern Canada (217,000 km2) by generalizing the empirical relationships that exist between regional historical records of fire (1880–2000) with forest inventory data and biophysical variables. Two random forest models were used to predict TSLF at the scale of 2-km2 cells. These cells were first classified into TSLF ≤ 120 years and >120 years and TSLF was then estimated by decade for cells classified as younger than 120 years. Overall, both models showed a substantial agreement at the scale of both the study area and landscape units, but the accuracy remained fairly low at the scale of individual cells. Results show that the decades between 1920 and 1940 were characterized by widespread fire activity covering approximately 28% of the study region. Studies have reported a doubling of the burn rate from 1970 to 2000, but our longer-term analysis suggests that the 1970–2000 burn rate (4.3% decade-1) is lower than the one detected between 1920 and 1940 (16.4% decade-1) and provides a relevant context for interpreting the recent increases in area burned observed since 1970. These results highlight the importance of lengthening the historical records of fire history maps in order to provide a better perspective of the actual changes of fire regime.

In this study, the researchers developed a map of the time elapsed since the last fire in Eastern Canada’s boreal forest by correlating historical fire data (1880-2000) with forest inventory data.

Time elapsed since the last fire is useful for developing forest management strategies. This information is not available for all of Canada’s regions, nor for all time periods, which is what makes this work relevant. 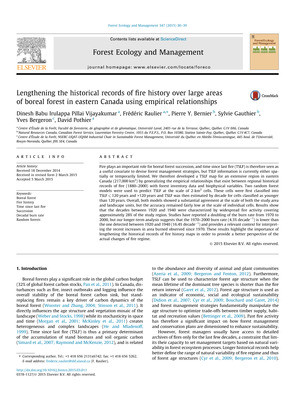