In North America, Gremmeniella abietina, European race (GaEU), was reported in 1975. Our objective was to follow the spread of GaEU on red pines growing on flat land and on slope. Annual height infection varied significantly on flat land, ranging from 60 to 110 cm in 1991 to 0 to 50 cm in 1992. On the slope, pines in the bottom were killed by the disease, but survived on the top. Favorable conditions follow a horizontal line about 10 m over the lower elevation and are probably related to fog or mist. The horizontal disease spread over a 3-year period was only 20 m and this is mainly explained by the absence of ascospores in North America.

This study demonstrates that the height of the most humid areas or fog can influence the upward spread of the European strain of scleroderris canker on trees in plantations.

The symptoms spread each year through the tree crown and the height at which the tree is infected varies. It increases each year by about 0.5 m; however, under the right conditions, it can spread up to several metres. The researchers also found that the disease spreads horizontally over short distances (about 7 m).

The European strain of scleroderris canker was reported for the first time in North America in 1975. This disease mainly attacks red pine and causes cankers on the trunk as well as burns on shoots. It kills young pine trees measuring less than 6 m in height fairly quickly. 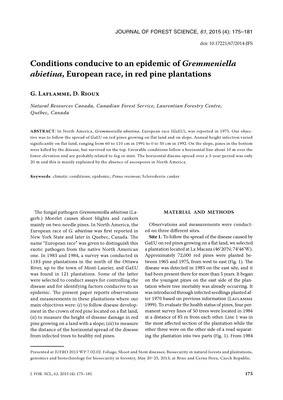