We used GPS radio telemetry to study 34 wolf packs in winter in northern Ontario to determine which factors influenced their use of space. We found that wolves most frequently used spaces near deciduous, mixed and disturbed stands favoured by moose (the predominant species of prey in their diet) that were in proximity to linear corridors such as shorelines and road networks. Our results also suggest that wolves in boreal ecosystems alter their territory size rather than their pack size in response to local variations in habitat quality. This could be an adaptive strategy that balances the trade-offs between the cost of defending territory and the energy required to gain resources. Variation in pack size may be related to other factors such as competition between wolf packs. 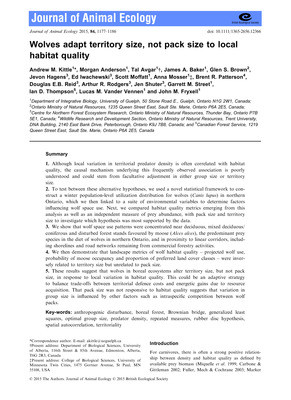