The susceptibility of adults and larvae of the Japanese beetle to isolates of the fungi Beauveria bassiana, B. brongniartii, Metarhizium anisopliae, Lecanicillium longisporum and L. muscarium (Ascomycota: Hypocreales) was evaluated in laboratory bioassays. The presence of intra- and interspecific variations regarding the pathogenicity of the isolates was investigated. Results show that most of the fungal isolates caused mortality in adults and larvae. Isolates M. anisopliae INRS 705 and B. bassiana INRS 236 induced 70.3% and 65.2% of mortality in P. japonica adults, respectively, and both caused the death of about 37% of larvae. Of the 17 tested isolates, 13 caused larval mortality. However, no significant difference was found between the susceptibility of larvae to isolates from different species and those from a same species. Lecanicillium species are undoubtedly not pathogenic to adults and seem to have few effects on larvae. Based on the results obtained with the selected isolates, intra- and interspecific differences relative to the pathogenicity of the isolates appeared to be present. Overall, this study expanded the knowledge about P. japonica susceptibility towards entomopathogenic Hypocreales fungi. The implications of this study regarding the development of a biological control agent are discussed.

In this study, the researchers conducted laboratory tests to determine the degree of vulnerability of Japanese beetle adults and larvae to fungi belonging to three different genera (Beauveria, Metarhizium and Lecanicillium). Most of the fungi studied induce mortality in adults and larvae. However, there are differences between the genera and within the same genus.

The Japanese beetle is an exotic pest that causes damage in tree nurseries, particularly in Ontario and Quebec. The adults feed on more than 300 plant species, which makes it a major pest. These findings will provide input for research seeking to develop a biopesticide to control these insect pests. 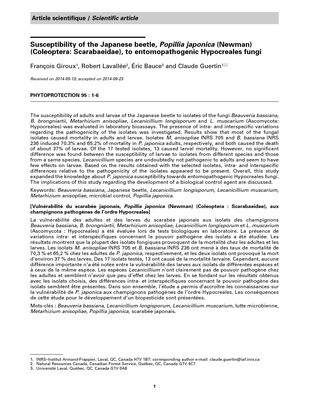