Background: Cumulative impacts of wildfires and forest harvesting can cause shifts from closed-crown forest to open woodland in boreal ecosystems. To lower the probability of occurrence of such catastrophic regime shifts, forest logging must decrease when fire frequency increases, so that the combined disturbance rate does not exceed the Holocene maximum. Knowing how climate warming will affect fire regimes is thus crucial to sustainably manage the forest. This study aimed to provide a guide to determine sustainable forest harvesting levels, by reconstructing the Holocene fire history at the northern limit of commercial forestry in Quebec using charcoal particles preserved in lake sediments. Methods: Sediment cores were sampled from four lakes located close to the northern limit of commercial forestry in Quebec. The cores were sliced into consecutive 0.5 cm thick subsamples from which 1 cm3 was extracted to count and measure charcoal particles larger than 150 microns. Age-depth models were obtained for each core based on accelerator mass spectroscopy (AMS) radiocarbon dates. Holocene fire histories were reconstructed by combining charcoal counts and age-depth models to obtain charcoal accumulation rates and, after statistical treatment, long-term trends in fire occurrence (expressed as number of fires per 1000 years). Results: Fire occurrence varied between the four studied sites, but fires generally occurred more often during warm and dry periods of the Holocene, especially during the Holocene Thermal Maximum (7000–3500 cal. BP), when fire occurrence was twice as high as at present. Conclusions: The current fire regime in the study area is still within the natural range of variability observed over the Holocene. However, climatic conditions comparable to the Holocene Thermal Maximum could be reached within the next few decades, thus substantially reducing the amount of wood available to the forest industry.

This study shows that during the warmest periods (thermal peak) of the Holocene (7,000 to 3,500 years BP), fire occurrence was twice as high as it is today.

The cumulative impact of forest fires and harvesting can change the forest cover, turning a closed forest into an open forest. A forest is said to be closed when it is primarily composed of stands measuring 7 metres or more in height and canopy density is greater than 40%. In order to minimize the risk of change in the forest structure, the rate of harvest should be adjusted according to fire probability. Thus, the impact of these two disturbances should not exceed the fire frequency observed during the thermal peak of the Holocene.

By reconstructing forest fire history during the Holocene at the northern limit of assignable forests in northeastern Canada, researchers sought to establish boundaries that could help to determine harvesting rates to promote sustainable forest management in this region. They showed that the current burning rate is in the range of fire variability of the Holocene, but in decades to come, because of climate change, there could be burning rates similar to those of the Holocene’s thermal peak. This would reduce the quantity of wood available for the industry. 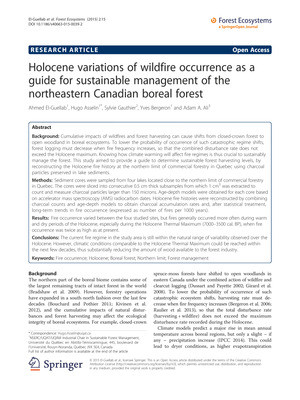